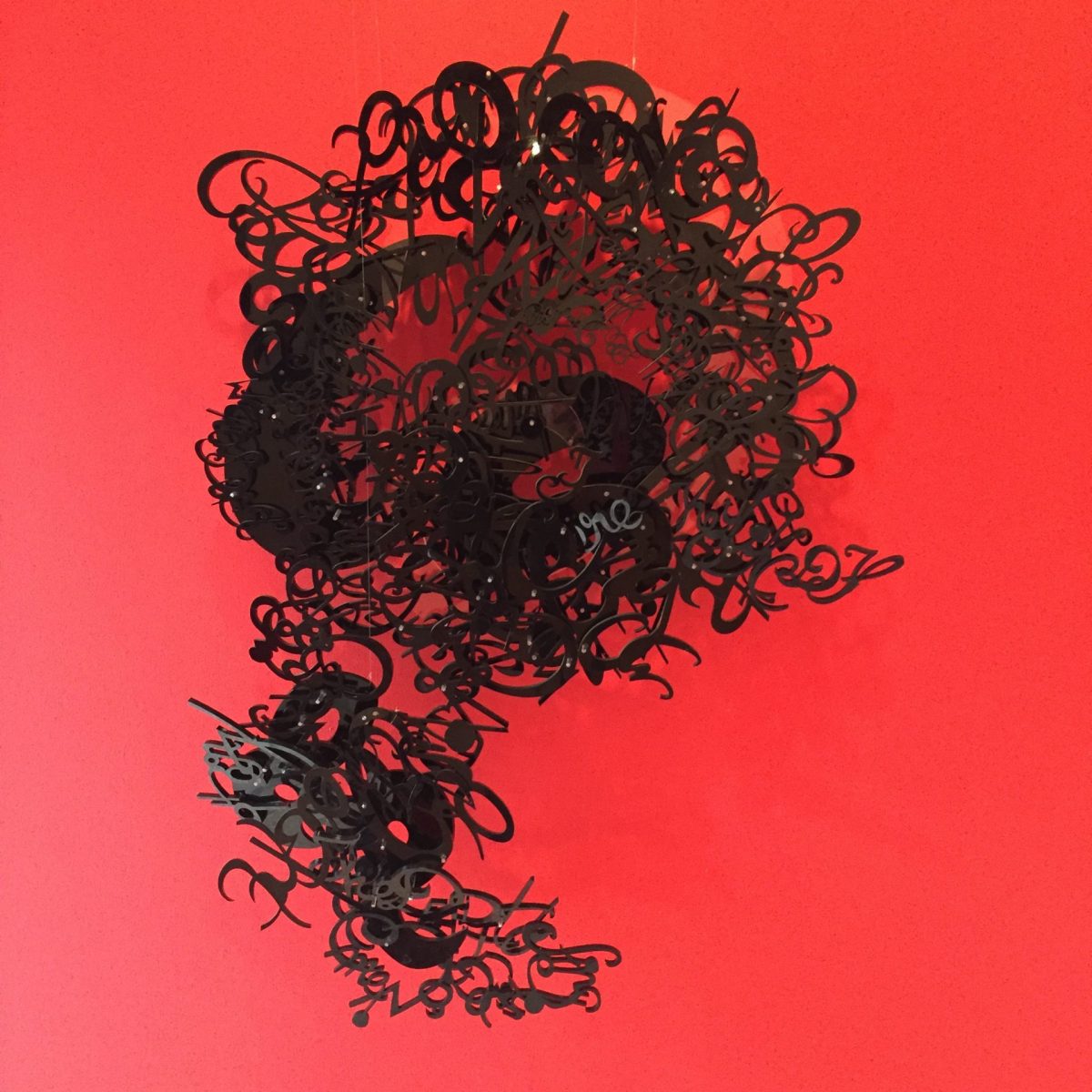 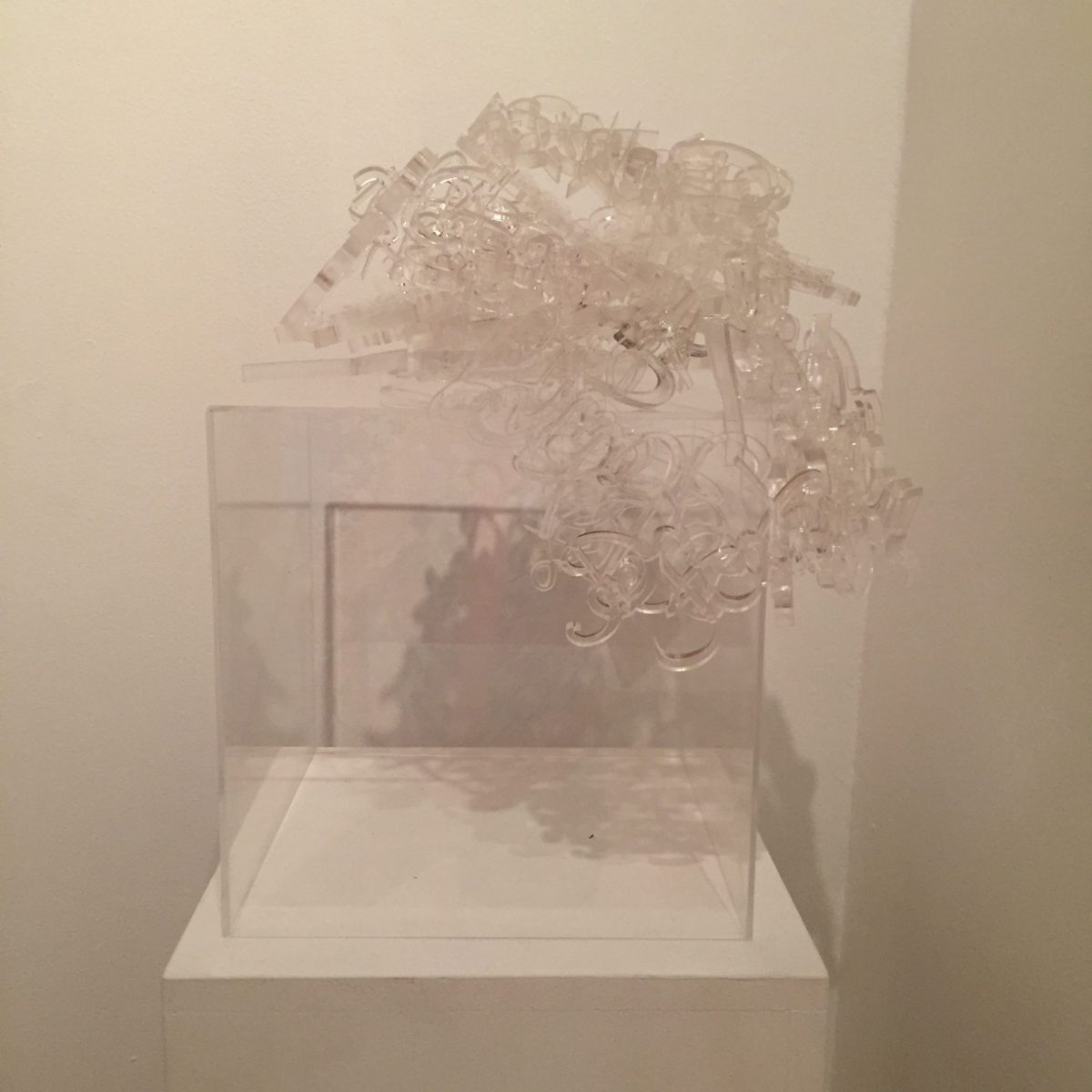 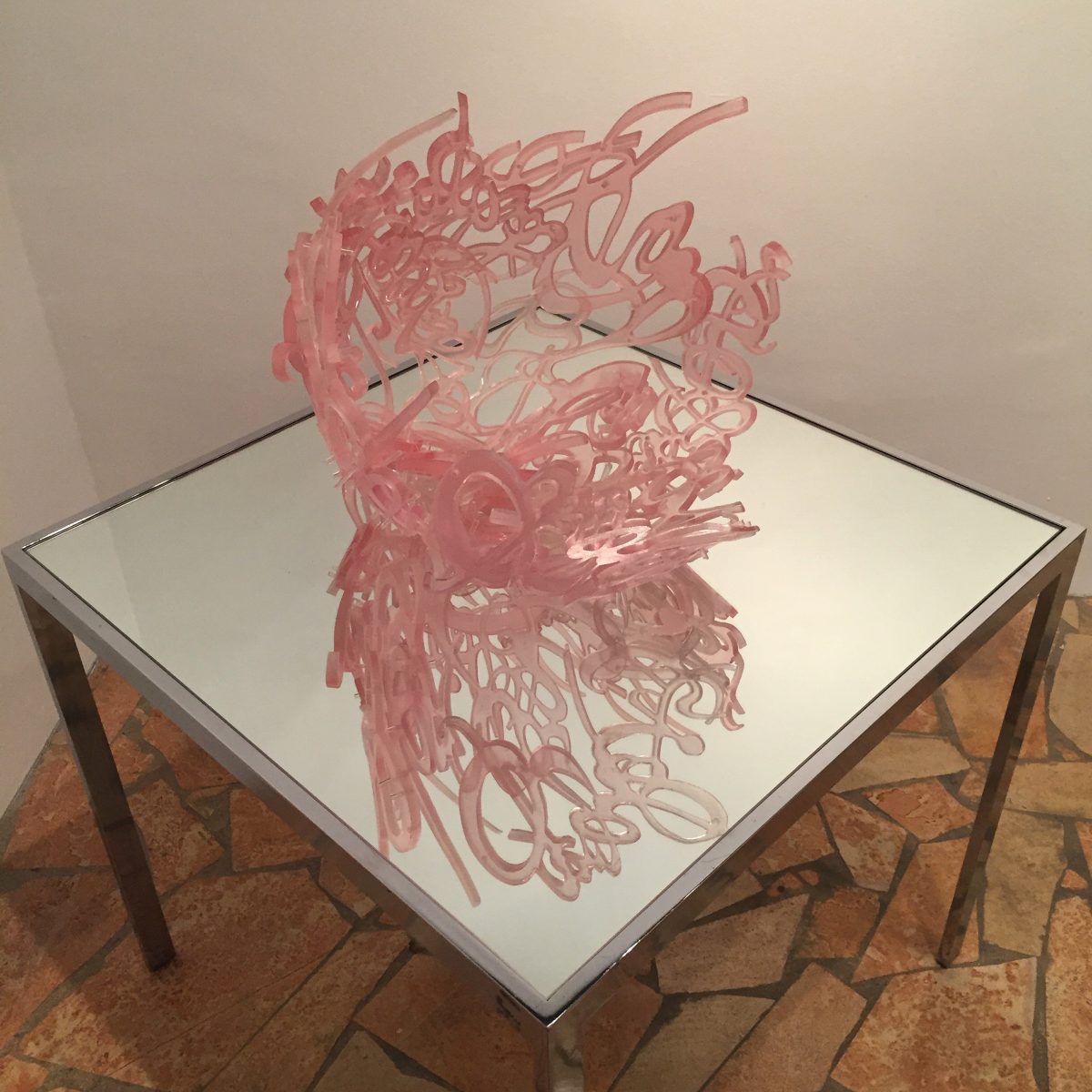 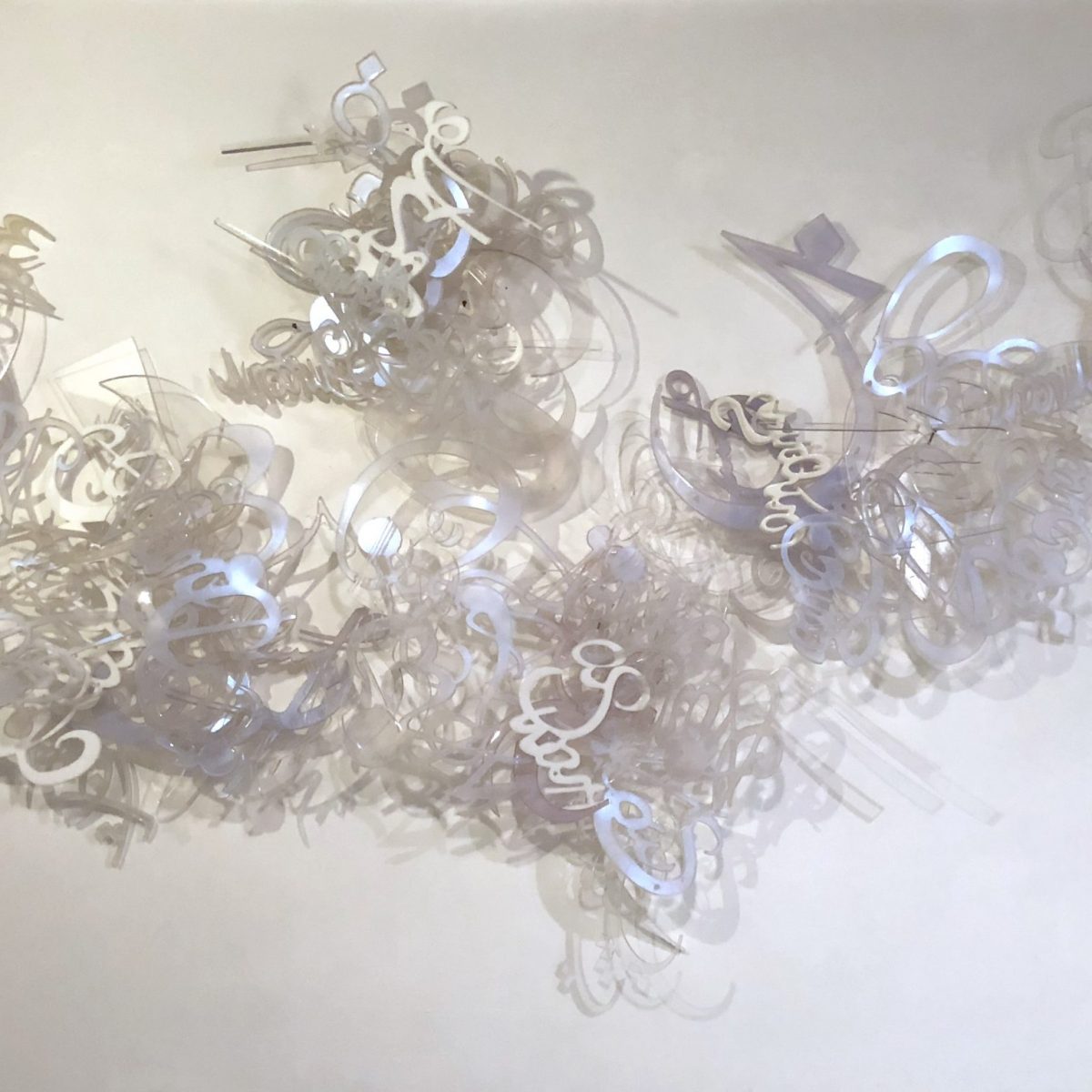 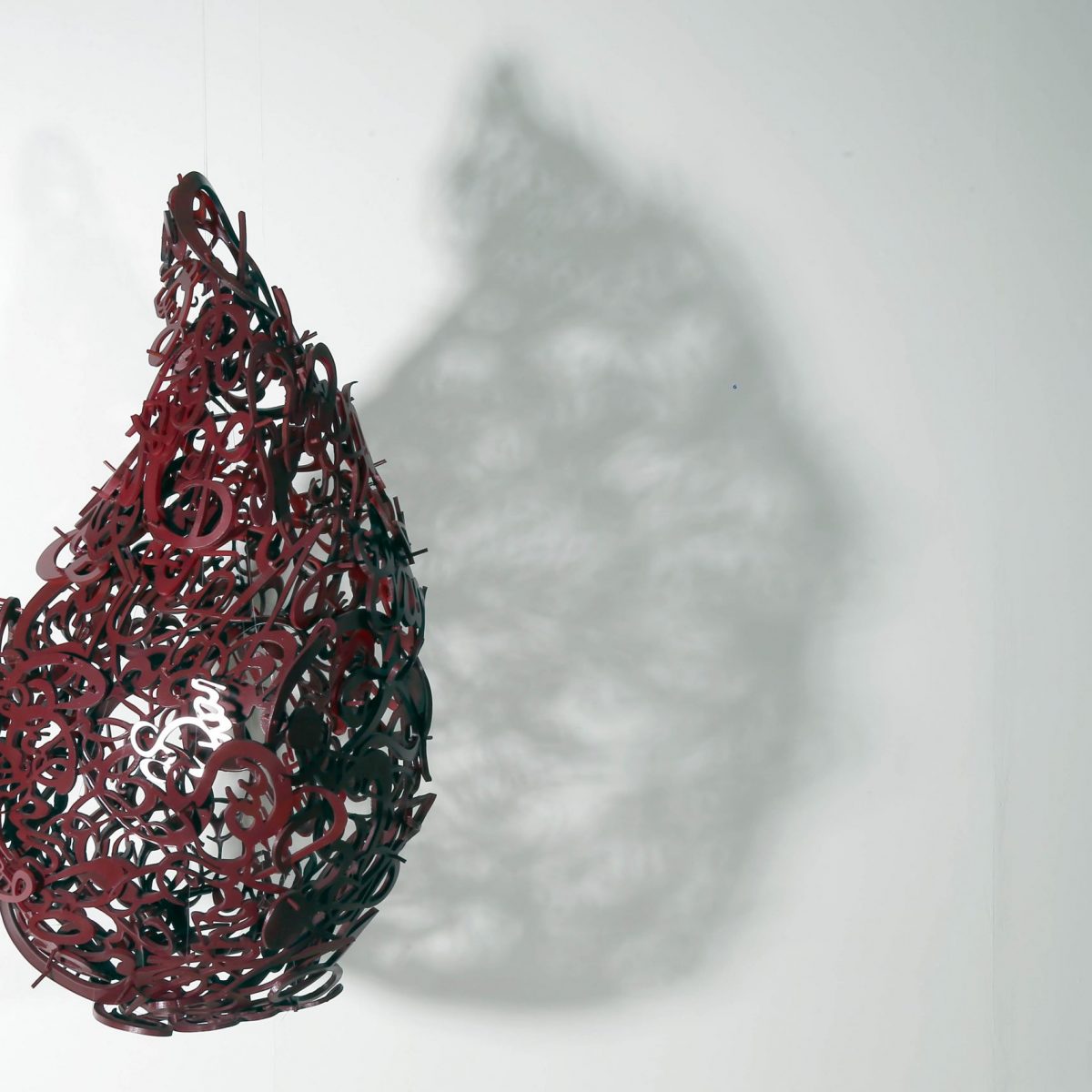 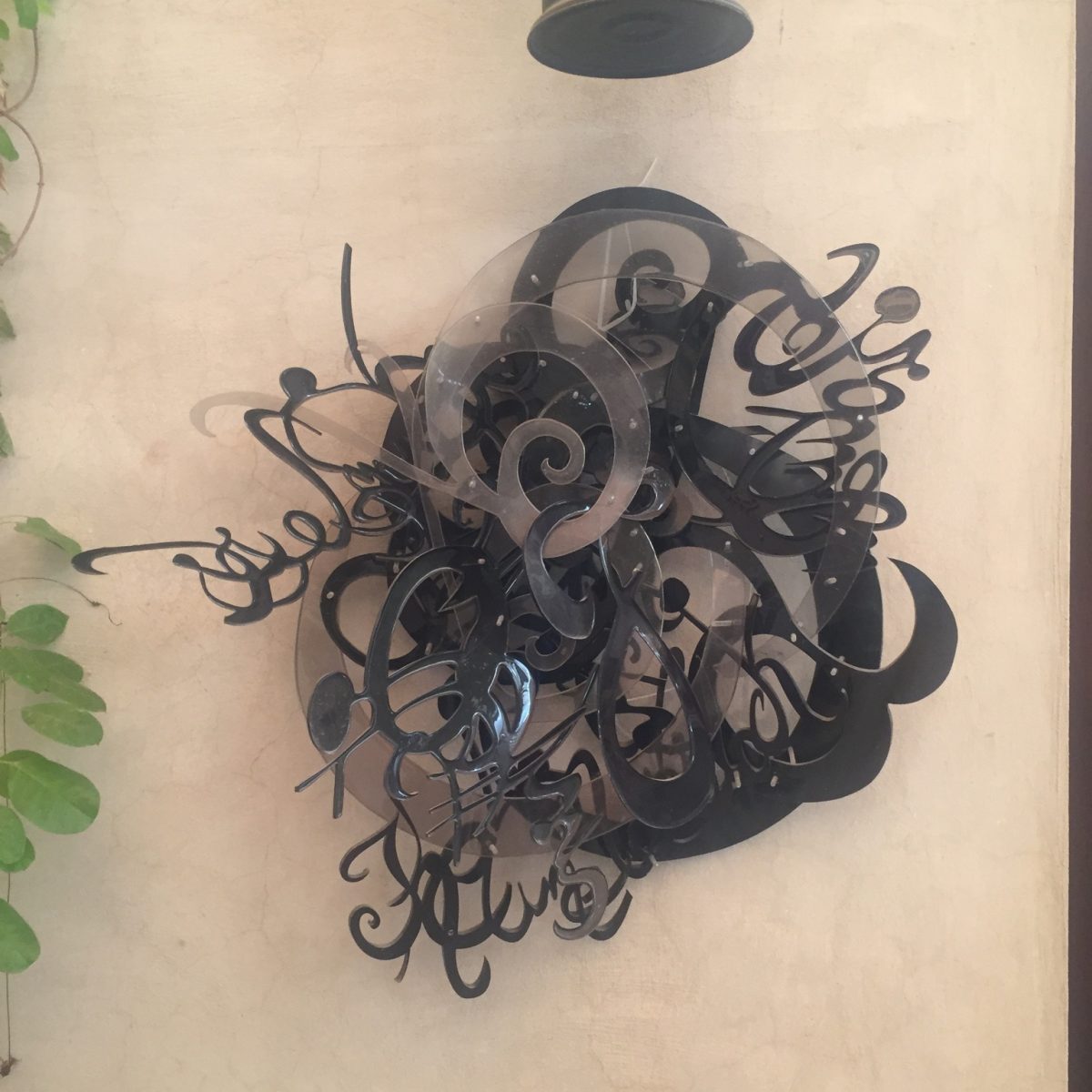 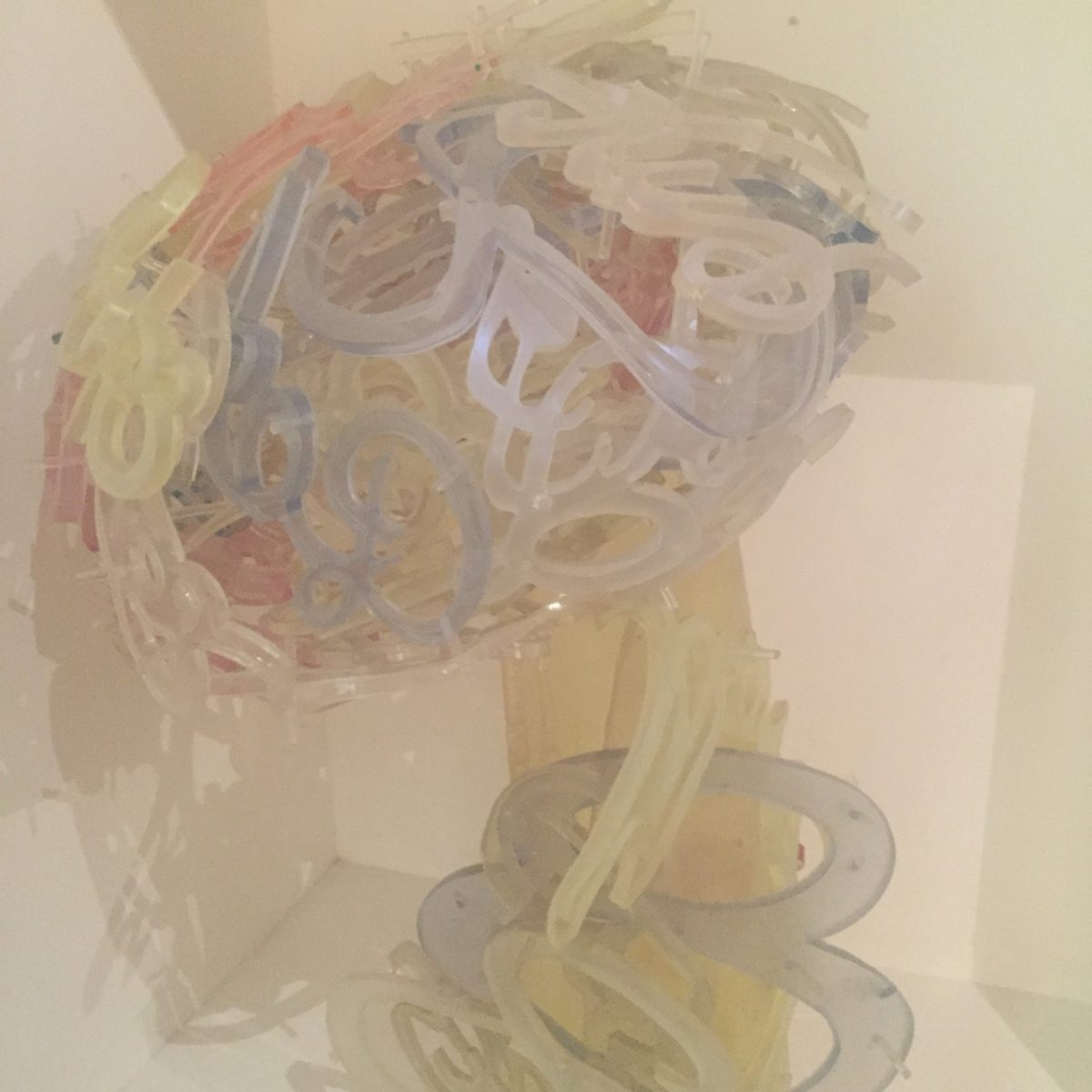 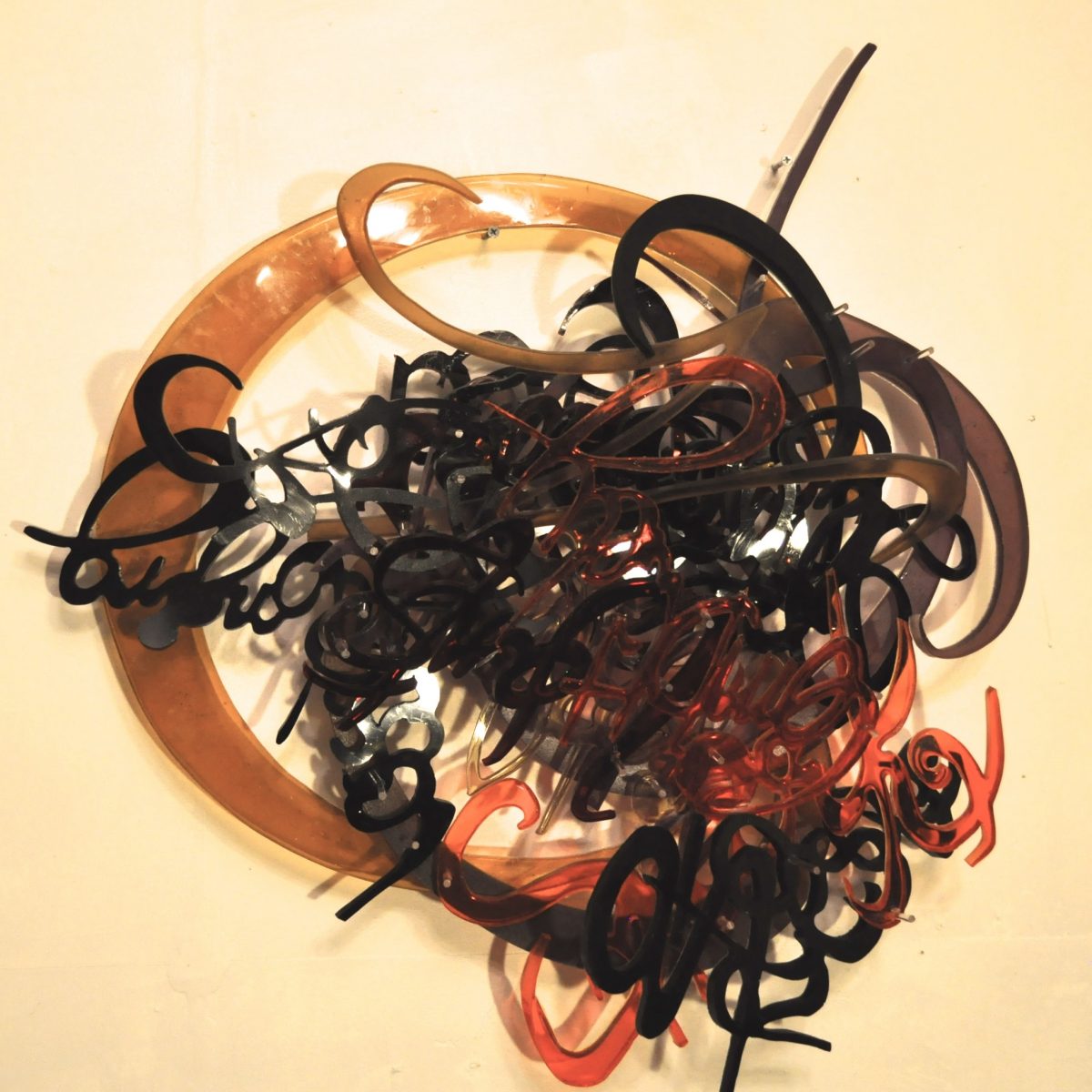 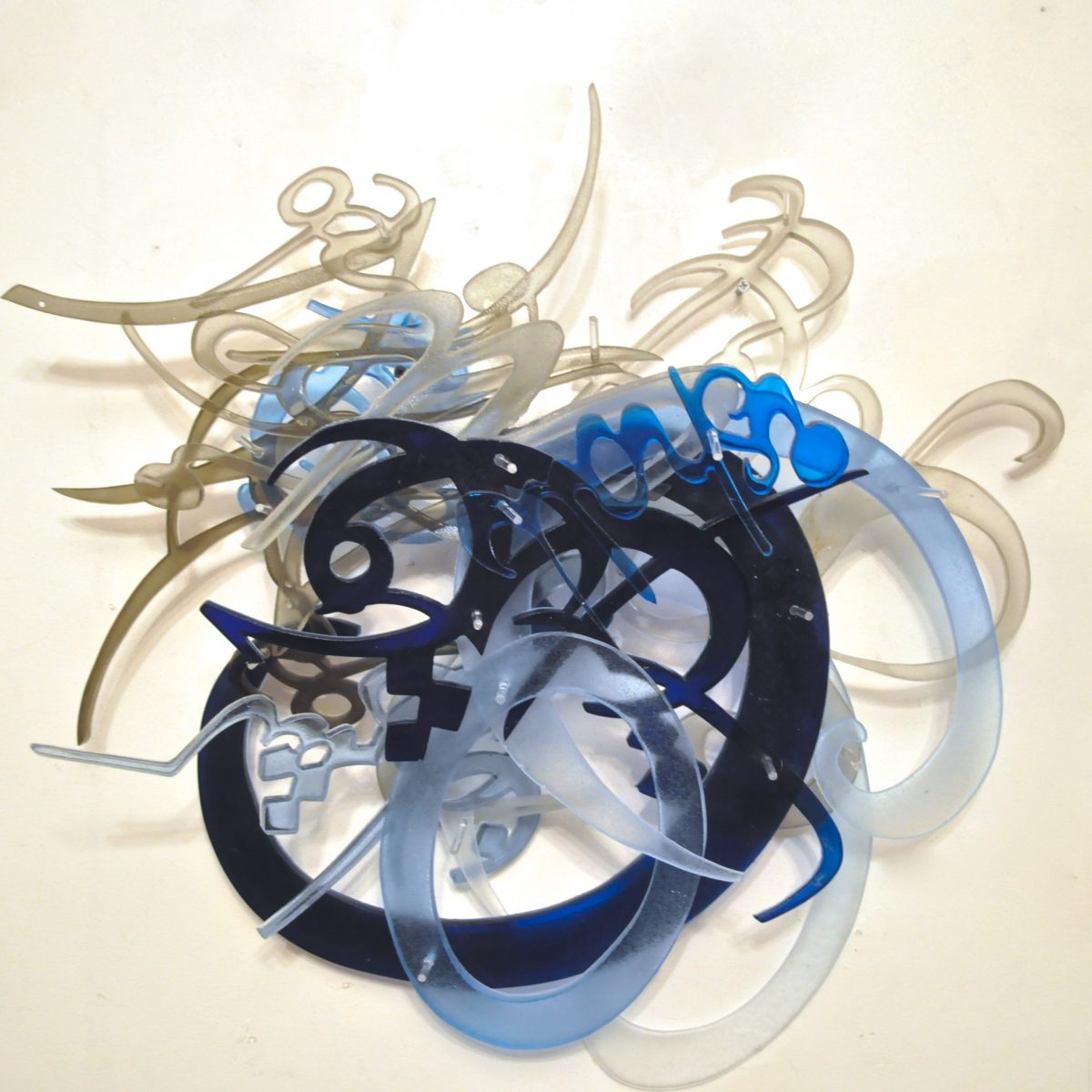 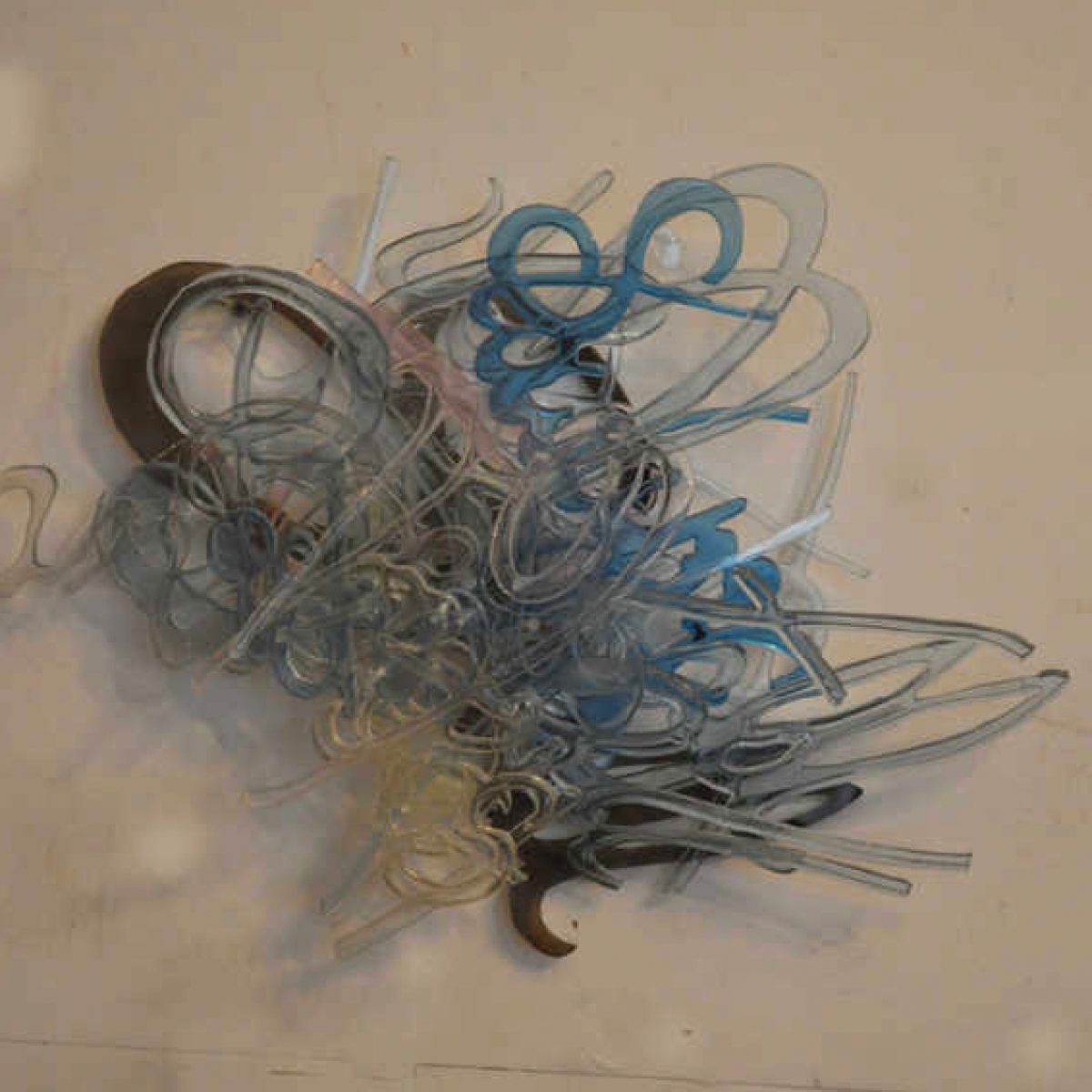 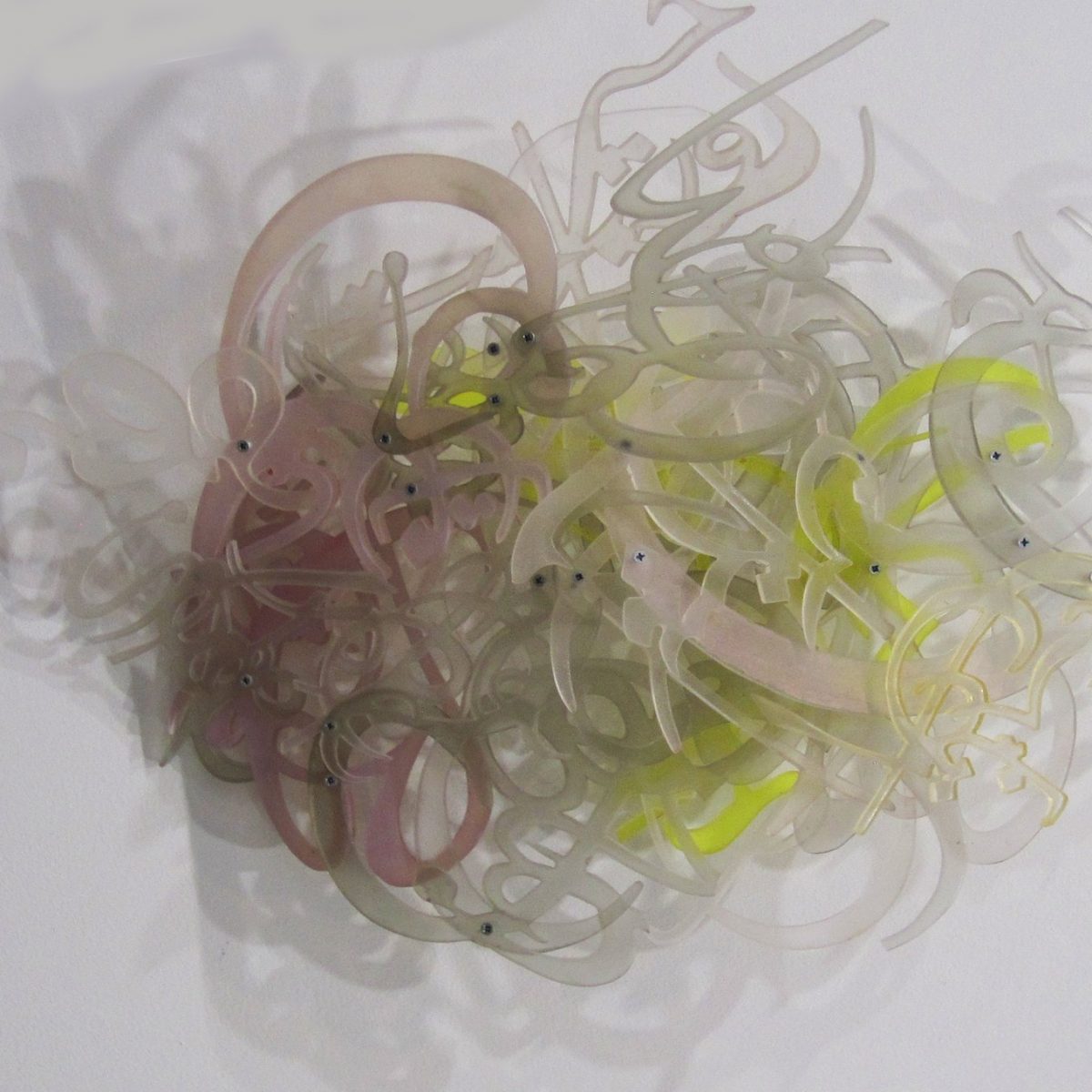 Pakistani born Simeen Farhat describes her work as a record of her own evolution, in that art is synonymous with life. The abstract forms created out of dyed cast resin and acrylic have their roots in literature. The texts used by Farhat in her work are poems written in Urdu, Farsi, Arabic, German and English. Personal writings and concerns have a place alongside writings of worldwide importance.

Farhat has a strong appreciation for the importance of language in allowing one the opportunity to make sense of a situation that seems to be in chaos. Her work embodies this: a cloud of letters, words and phrases, decipherable only by locating a word amongst many and tracing its path. The physicality of her work is poetic and graceful, utilizing form and shadow, positive and negative space. It presents an opportunity to step past the chaos and discover the sense.

The text in my sculptures and installations are revolutionary poems, appropriated mostly from famous Farsi and Urdu poets, such as Rumi, Saadi, Ghalib and Faiz Ahmed Faiz, who all wrote powerfully about freedom of thought and speech. The small-scale wall-mounted sculptures, “Speech Bubbles,” represent the poems’ poignant and piercing power to induce strong emotions. As many of these poems have also been sung by famous singers from the sub-continent, the suspended installations also express the poems’ melodic power and ability to elicit uplifting thoughts. The shadows cast on the wall are also vital to the aesthetic as they add additional depth and layers behind their meaning. My goal is to translate their poetic dynamism into visual energy.

By pairing female forms with poetic text, I strive to show a connection between the mind and soul: a mind is free to think and a soul free to exist. Separate from their utterance as a sound and with or without the coverings of an outer garment. The text is used aesthetically, as a flowing pattern; as well as philosophically, paired with the ethereal figures it enables a dialogue with the viewer or monologue between mind and body.

Through the interactive nature of my installations, sculptures, and textual drawings, I pose questions for each culture to examine from their own perspective: Considering that there is a figure but no embodied form showing, can this be called contemporary figurative Islamic Art? Do these life-size veiled figures threaten or confuse non-Muslim Westerners and why? Recognizing that this work represents women’s freedom to think, can this work be called a universally Feminist art?