CIRCLES IN MOTION02 February 2022Next 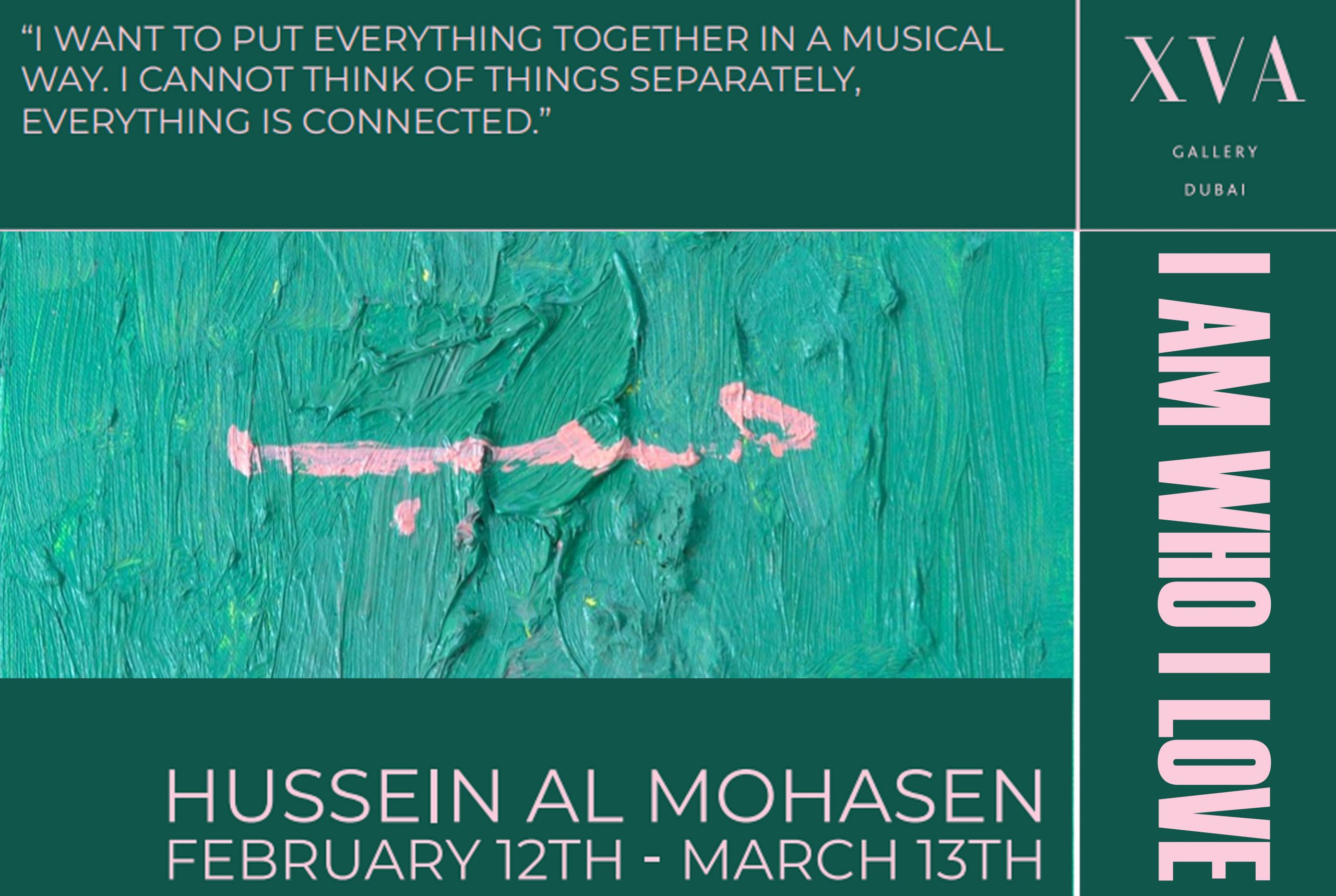 “I want to put everything together in a musical way. I cannot think of things separately, everything is connected together.”

‘I AM WHOM I LOVE’ taking inspiration from Al-Hallaj, Mansur Al-Hallaj (858-922), an essential philosopher from the ninth century and crucial writer of the Sufi movement, Hussein Al Mohasen reaches beyond reality with his mesmerizing new collection. He captures the viewers into experiencing a hypnotizing visual journey, which makes them see reality in a peaceful free manner; even if reality, sometimes, is not as desirable as we imagine it. Furthermore, color is essential in his work, where the different connotations associated with certain colors beautify what he is trying to convey through art.

Behind the obvious simplicity of his work, lurks a decade-long journey shaped by poetry from the Arab world and the complex intersections between modern spaces and personal freedoms. Al Mohasen’s work is visually global and overcomes regional paradigms, presenting the contemporary Arab experience after the poetry and music that inspired him: In the end, we all speak the same language. Hussein Al Mohasen’s work has been exhibited across the Middle East since 1999. His most recent solo and group exhibitions have been held in Bahrain, Kuwait, the United Arab Emirates, Germany, and Spain.

Hussein Al Mohasen was born in Qatif, Saudi Arabia, 1971. He has been active in the art scene since his first appearance in 1999 at the Al-Janadriya Festival. Since then, he gained an important place in the artistic community. Al Mohasen’s work is characterized by a singular dialogue between the audience and the artist. The images are never static; the sharp-coloured stenciled images are translated into a narrative of experiences. The Saudi artist has moved away from abstract surfaces, into symbolic and iconographic imagery. He incorporates his humorous readings into the altogether tragic narratives of contemporary Arab history. His work is both conceptual and liberating, drawing from the versatility of public art.
Al Mohansen’s stencils surface with almost sculptural forms, breaking out of the formal limits of the frame, sometimes on paper, often on canvas. His works are not supposed to be only contemplated but taken in with the full weight of the present.

Behind the apparently obvious simplicity of his works, there lurks a decades-long journey shaped by poetry from the Arab world and the complex intersections between modern spaces and personal freedom. Al Mohasen’s work is a global endeavor, incorporating regional paradigms and presenting – rather than merely representing – the Arab experience of the contemporary after the fashion of the poetry and music that inspired him: In spite of the broken parables that divide us, at the very end, we all speak the same language.

About the XVA Gallery

XVA Gallery XVA is one of the leading galleries in the Middle East that specializes in contemporary art from the Arab world, Iran, and the Subcontinent. Exhibitions focus on works by the region’s foremost artists as well as those emerging onto the scene. The gallery’s artists express their different cultural identities and perspectives while challenging the viewer to drop prejudices and borders. XVA Gallery exhibits both locally and internationally; collaborating with galleries and participating in international art fairs, such as Art Basel Hong Kong, SH Contemporary, Singapore Art Fair and Abu Dhabi Art in 2014, in order to further expose Middle Eastern contemporary art.
XVA Gallery and XVA Art Hotel are located in Dubai’s heritage district, now called Al Fahidi Historical Neighborhood. XVA founded and organized the Bastakiya Art Fair from 2007- 2010 as part of its commitment to raising the profile of contemporary art practice in Dubai. For three years XVA was located in DIFC, and has now expanded its premises in Al Fahidi.