Library of the Infinitesimally Small and the Unimaginably Large 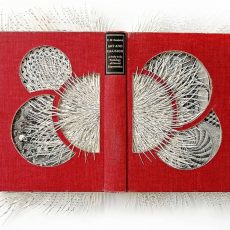 Wildenboer began her book project “Library of the Infinitesimally Small and Unimaginable Large” in 2011, a large-scale ongoing project that uses the library as a metaphor for the universe and was inspired by a short story by the Argentinian writer Jorge Luis Borges titled The Library of Babel. Through this series she makes reference to the relation between technology and the natural environment, looking at phenomena such as fractal geometry and the interconnectedness of all living things by creating visual metaphors that speak of a sense of wonder at the complicated beauty of patterns in nature.

She sources her books and maps from second-hand bookshops and flea markets all over the world. The books, sentences, words and letters become elements of new visual narrative in which the old and new narratives co-exist. Through the act of altering books, she draws emphasis to our understanding of natural history as mediated through text or language and our understanding of the abstract terms of science through metaphor.

“The universe (which others call the Library) is composed of an indefinite, perhaps infinite number of hexagonal galleries.”
– Jorge Luis Borges, The Library of Babel