Exiles in Hidden Worlds16 March 2019Next 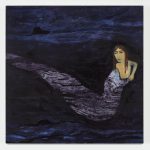 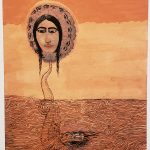 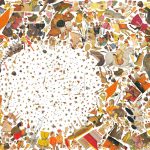 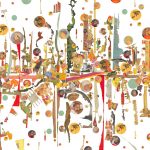 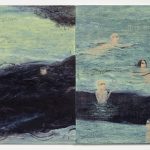 We record our past through many means; oral storytelling, writing, and imagery shape our histories. Culture, religion and lineage are all taken into account. History is factual and fictitious, accurate and exaggerated, beautiful and terrible.

Individuals can find a way to re-write our histories and re-contextualize our present; Samira Abbassy & Imran Channa do this in fascinating and powerful ways.

‘The ocean paintings in this show began as an attempt to imagine the plight of the Syrian refugees at sea. As they progressed, the paintings became less specific to these recent events on our news feed and more universal, timeless and mythical.

This water-crossing motif has been the subjects of myths, legends, epic poems and Biblical stories. In our current ecological dilemma, it can also be considered a metaphor of our precarious position within the immense power of Nature.

Elements of chance or fate, to which we are all subject, also dictate the materials-lead process, where the images are found within the paint. This practice of trusting intuition and allowing the materials to lead the way, suggesting ideas and images to me, brings me closer to the essence of the subject.

Delving into ‘the Oceanic’ and being swallowed whole by it, describes both the subject of this show, as well as the psychological process by which the works emerge.

As the great Carl Jung sums up:

“the night sea journey” is a kind of descent into Hades and a journey to the land of ghosts somewhere beyond this world,
beyond consciousness, hence an immersion in the unconscious.[“The Psychology of the Transference,” CW 16, par. 455.]
Mythologically, the night sea journey motif usually involves being swallowed by a dragon or sea monster.’

Samira Abbassy was born in Ahwaz, Iran & moved to London, UK as a child. After graduating from Canterbury College of Art, she began exhibiting in London. In 1988 she moved to New York to help establish & found the Elizabeth Foundation for the Arts Studio Program NY, where she currently has lifetime tenure and is a board member.

This Project is based on Badshahnama (The book of Kings), an illustrated history book from the Mughal period. This book, specially commissioned during the reign of Emperor Shah-Jehan, was presented as officially recorded documents on Mughal kings. The outcome was two-fold, on one hand acting as propaganda, while on the other, simultaneously presenting and documenting the ‘official’ history of Mughal kings through visual means. The book, originally produced in India is now in the British Royal Collection. Raising questions around the accuracy of pre-scripted history, this beautifully illustrated and richly informative book is bursting with sharp insights into the art, history and approach of Mughal rulers.

My approach to making this series deals with the idea of selecting and re-presenting fragments of the book in alternative contexts in order to open up new forms of engagement, relationships and meanings with the characters. Using a digital cut-and paste technique, I magnify the heterogeneous harmony of the original visual document by juxtaposingdifferent identities in order to form an alternative narration.

The act of taking the images away from their original context, and reinserting them with alternative proportions and in different formations creates a link based on differences rather than similarities. My role becomes a builder and a demolisher at the same time to let some things go in order to get something back.

Playing with our fascination with the rich history of Mughal miniature manuscripts, this series of works highlights voids and magnifies doubt, in order to question the documentation and representation via historical artefacts.

This project re-examines and brings into focus the various outcomes of visual historiography by magnifying the myths of Badshah and their Nama’s.’ Imran Channa, 2018

Imran Channa is a contemporary Pakistani visual artist who presents ideas through installation, drawing, painting, digital, moving image and sculpture. Channa draws attention to the ingredients required for the process of documentation, highlighting how history is recorded, framed and manufactured via photography, archeology and literature. Channa is interested in the role played by these modes in the perversion of knowledge and the construction of consciousness.

For Channa, historical narratives acts as a locus. They are points that create personal and national identities, while also acting as repositories where desires are consigned.

Rather than attempting to verify any kind of truth, Channa further obfuscates narratives through his work. In doing so he exposes how modes of knowledge production are beholden to the methods of the creator. Channa’s technique of layering, erasing, and concealment draws attention to the role and power of the artist, and can be seen as a critique of contemporary motivations that assign knowledge production as a purpose of art itself.